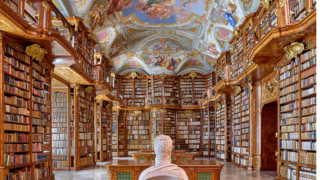 In the morning of the 22nd of February, the international group of TROIKA students got on the bus waiting in front of the dormitory for them, which would take them to two completely different destinations in upper Austria. Both of these places give an impression about the past of this country, about the good sides as well as about the darkest chapter of our history. The first stop was the monastery Saint Florian, named after one of the most famous martyrs of Christianity. When the students arrived there, they were received by a tour guide, who showed them through all the impressive spots of the baroque building. A special highlight of the tour was the main hall of the monastery’s library, where thousands of ancient books are stored between splendid carpentry works and a beautiful ceiling fresco. The tour also led the group to the belonging basilica, where one of the most famous pipe organs of the country can be found. After these cultural impressions, the students spent their lunch break in a nearby country restaurant where they could also enjoy the culinary highlights of the region. Once everyone got on the bus again, the tour continued to its second stop, a far darker and discomforting place. This refers to the former concentration camp of Mauthausen, a complex where prisoners of the Third Reich were held during World War II and had to work under unimaginably cruel conditions until they dropped dead. The tour guides managed to familiarise the students with this horrible topic in a sensitive but alerting way. The main message of the tour was that the terrors of Mauthausen were made possible by a society that was just looking away, and that civil courage and solidarity by each and every single person can help to prevent such wrongdoing from ever happening again. Visibly touched and stimulated to think, the students got on the bus again and got back to the dormitory after a long and exhausting day. In the end, this trip will certainly not be forgotten any time soon by the students and their perceptions of the good and the bad sides of Austrian history was definitely sharped. Photo credit: Monastery St. Florian