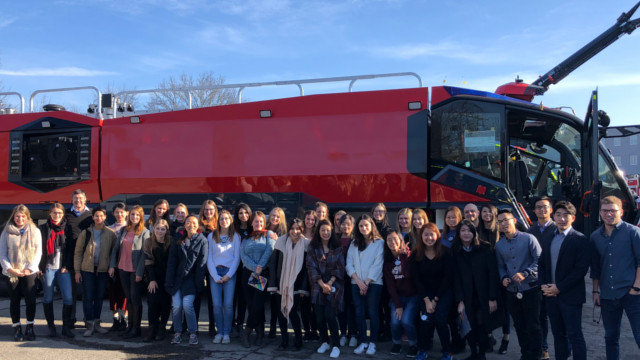 In the course of the ACT program, students do not only enjoy an outstanding theoretical management education, but do also get a first hand insight to the daily operations of many leading companies in Upper Austria. Already in their first week after arriving in Linz, the international group faced a tight schedule with interesting company visits almost every day. After a warm welcoming reception at the JKU University on Monday the 11th of February, the first company visit took place on Tuesday and led the students to the headquarters of Pöttinger in Grieskirchen. The company was founded in 1871 as a traditional family business and has built a reputation as one of Europe’s leading agricultural manufacturers over the years. The next day, the ACT group had the ability to get to know their new temporary home Linz a little bit during a guided city tour, that provided them with lots of interesting cultural and historical facts. On Thursday, the focus went back to Business, as the students had not one but two company visits ahead of them. The first one was Fronius, a firm that has started as a one-man battery charging technology provider and has now become an internationally operating innovation pioneer in the fields of photovoltaic and wending technology too. Secondly, the group headed to the headquarters of Rübig, which has also started small as a forging company and is now divided into the three divisions of die forge, industrial furnaces and heat treatment with application possibilities ranging from the aviation industry to the human body. On Friday, the students had a last highlight waiting for them, which was the trip to the production plant of Rosenbauer, the world’s leading manufacturer of firefighting systems and disaster protection. The guided tour led to impressive special firefighting vehicles and was filled with many interesting facts about the history and operations of the company. At the end of the week, the students were looking back at numerous versatile impressions of the strong industrial competence in the Upper Austrian region. In addition to that, they were looking forward to working on the highly interesting and innovative protects they were assigned with from those companies. Photo credit: IFI