In a competitive selection process Michael Gusenbauer was selected as one of 350 young scientists from around the world to attend the 6th Lindau Nobel Laureate Meeting. 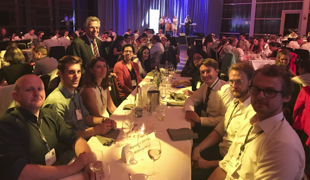 In the scenic city of Lindau he met likeminded young academics as well Nobel Laureates to discuss Economic Research and Policy. The five-day meeting provided good opportunity to meet awarded researchers, such as Myron Samuel Scholes (picture), for exchanges of thought. The meeting was commenced by Mario Draghi, President of the European Central Bank, followed by presentations of 17 Nobel Laureates that received the Alfred Nobel Memorial Prize in Economic Sciences.