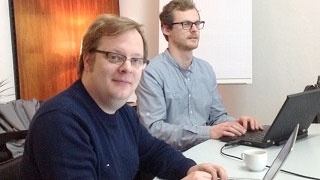 Besides his involvement in the supervision of three dissertation projects, Rainer Harms contributed his outstanding expertise mainly to two key projects during his research fellowship at the IFI JKU between fall 2014 and spring 2015.

The first project investigates ethical research of Business Scholars. Recent scientific scandals, also in the field of Business Administration, have raised concern about whether researchers take ethical considerations into account when conducting scientific research. Issues of concern are for example over-interpretation of empirical findings, concealment of inconvenient findings, to outright data fabrication. Previous works on nanotechnology researchers (published in Journal of Business Ethics) and business administration scholars (under review) indicate that the effect of researcher’s ethical foundations is contingent to competition and autonomy within their working contexts.

Our previous research in this context found that social desirability bias impacts on the validity of findings that are based on data collected in traditional surveys. One possible key might be gamification (the use of game elements). An online game developed by Mag. Johannes Gartner will now be used as an innovative research instrument to study the ethical behaviour of business scholars.

The second project investigates innovation offshoring of SME. Innovation offshoring allows companies to tap into the global creative and engineering potential. While this instrument seems to be the domain of multinational companies, the move towards Open Innovation also reaches SME. The project is based on an extensive literature review led by Mag. Michael Gusenbauer. Rainer Harms was intensively involved in developing a survey that will be distributed to IO and SME researchers during the first quartile 2015.

During the research visit a manuscript was submitted to the British Journal of Management jointly with Isabella Hatak and Matthias Fink. Another manuscript for the Journal of Product Innovation Management was further developed together with Michael Gusenbauer and Matthias Fink. Future projects were initiated by Rainer Hams together with Daniela Maresch focussing on the role of patents in start-up success.