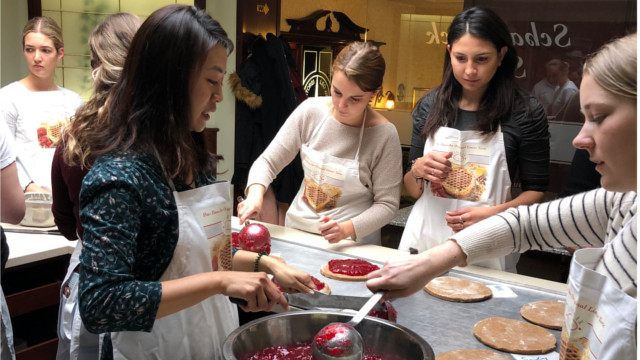 On the 25th of March, the ACT group was invited to the confectionary Jindrak to bake their own Linzer Cake and learn a bit about the traditional pastry named after the city. First of all, the international students were welcomed warmly to the baking room by the master confectioner, who provided them with some interesting background information about the history of the famous cake and the traditional business itself. The first known recipe of the Linzer cake dates back to the year 1653, which is why the cake is said to be the oldest one passed down from generation to generation. The confectionary Jindrak is strongly linked to the cake, even though it was founded only in 1929 as a family business by Leo Jindrak the first, who also started the first mass production of the cake. Nowadays, his grandson Leo Jindrak the third is leading the company, and next to the Linzer cake numerous other delicious pastries, pies and cakes are produced. After this little insight to the world of the confectionary and its most famous product, the students themselves had the possibility to put an apron on and step into the confectioner’s shoes. They were provided with an already finished dough base, which they had to top with red currant jam. Afterwards, everyone designed their own grid for the cake and finished their work with some ground almonds for the sides before putting it into the oven. Whilst the cake was baking for 40 minutes, many students tried one of the other pastries or enjoyed a coffee. In the meantime a short movie about the legends surrounding the Linzer Cake and the traditional confectionary was shown to the students. Finally, the cakes were ready and everyone was happy to see the final result of their efforts. Before leaving with their individual cakes, they also received a baking diploma as an additional memory of this sweet afternoon. (Photo credit: IFI)